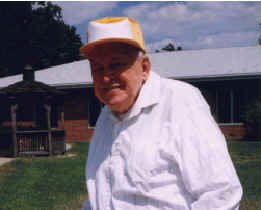 The man who discovered Ultra Depth® and Mind-to-Mind Heeling

Mr. Walter A. Sichort, Sr. was a practicing hypnotist and a professional magician.  He was able to induce his assistant Mary Borgessi, in his magic show demonstrations for terminally ill children, not only into the Esdaile State (also called the, „Coma State“) but also into the Catatonic State which is the deepest part of the Esdaile State.  He would have her dress like an angel in a long white chiffon dress and he would wear a black tuxedo. He would then place her feet onto his knees and hold her waist as she faced the audience as he pivoted in a circle.  This gave the appearance as if she was flying.  She appeared in this state, with her arms outstretched and perfectly still, as an angel in flight.

One day while working with her in state Mr. Sichort said to her, „Go deeper than you have ever gone before.“ suddenly she went completely limp and instantly was producing rapid-eye-movement (REM). He did not understand what was going on.  Mr. Sichort then tried to have her exit from this state but it was not working with a short count up.  So after about twenty minutes, he used a longer count up and she emerged.  He found that she had no recall of this ever happening.  Puzzled about this state that she entered, Mr. Sichort set out to find a way to reproduce again within her.  It took quite some time before it worked again and this time he found out what words he could use to get her there and how to anchor this depth with one single word for reentry.

However, she was a young and in love and she ran off to Florida to marry her sweetheart without giving any notice. This left Walter Sichort without someone to continue his research with.  Then, Mr. Sichort decided to see if he could get his colleague, Sara Zane, into this state.  Since she was already conditioned for somnambulism and the Esdaile State, he thought it would be rather easy to have her achieve this more profound depth.  Sara was also setup with a signal word that, if she allowed, would instantly send her there. Well, to make a long story short, she did achieve this state and Mr. Sichort set her up with a keyword that they both became famous for.  This word was, „Elephant.“  When Walter would say that word to Sara, she would instantly and spontaneously drop right into this state and produce complete muscle flaccidity and rapid-eye-movement.  Mr. Sichort then named this profound state, „Ultra Depth®.“

Mr. Sichort and Mrs. Zane decided to research what this depth could provide in the way of benefits.  He found that it helped to promote and expedite the healing of any abnormal condition that an individual may be suffering from. He discovered that when it came to physical healing, the time of healing was increased from six to ten times the individuals normal rate of healing. This was documented by the Philadelphia doctors, Dolman and Marko. It was done through some method of systemic enzyme counts, something that I never really understood.

On Saturday, August 12, 2000, at 4:39 a.m., the hypnosis community said goodbye to yet another one of its giants. Walter Sichort, a master in hypnosis for more than fifty years, died. Mr. Sichort began teaching hypnosis in the early 1950s. In 1962, he established the Institute of Relaxation in Blackwood, New Jersey.   With Sara Zane as his assistant and Al Rothchild as one of his instructors, he began a remarkable career in hypnosis.

In 1978, Mr. Sichort, a recognized authority in the field of hypnosis, was the president of The Hypnotists Union, Local 477, OPEIU of the AFL-CIO. He was a member of the Board of Advisors for the American Association of Professional Hypnologists, and Trustee for the Hypnosis Society of America. He worked in conjunction with the American Hypnotic Association and was an instructor for the International Christian University.  In 1993 Mr. Sichort was inducted into theInternational Hypnosis Hall of Fame and presented with the SEALAH award for Life Achievement.

Mr. Sichort left behind a legacy of discoveries in hypnosis, including Ultra Depth® and Mind-To-Mind Healing. He and his assistant Sara Zane would demonstrate this depth of hypnosis beyond the Esdaile State. The keyword that Walter would use to send Sara to this state was „Elephant!“ To honor Walter Sichort, we have officially renamed this depth the Sichort State.

The Mind-To-Mind Healing Technique is remarkable. It not only helps a person with minor healing issues, but major health obstacles can be overcome as well. Mr. Sichort worked with a young girl who was born with polio and was fitted with braces. She used crutches to walk. Eventually, her leg muscles developed and strengthened. She was then able to walk unassisted.

Mr. Sichort’s love for people and an exceptional desire to help the underdog led him into many adventures and opened the pathway to these discoveries. Mr. Sichort opened his heart to many by performing magic; as a clown he gave many needy children the opportunity to smile and experience a moment of joy in their lives. We will miss you, Mr. Sichort, and now it is time for you to, „Deeply Relax!“